You are hungry.  There is “food” that you can get quickly and be back on your way to what ever it is you were going to do in the first place.  It is called FAST FOOD.  The whole point is not health, it is speed.  These eateries have installed DRIVE UP windows.  BRILLIANT!  You can drive up, roll down your window, place your order, and receive it without leaving your car.  Efficient to say the least. HOWEVER, It never fails that when I am lured into this fast food illusion-I am behind this person.

IT NEGATES THE “FAST” PART OF FAST FOOD WHEN YOU HAVE TO STOP, SHIFT TO PARK, OPEN YOUR DOOR TO ORDER, CLOSE IT, SHIFT TO DRIVE, MOVE CAR FORWARD, STOP, PLACE CAR IN PARK AGAIN, OPEN DOOR TO PAY, PAY, CLOSE THE DOOR AGAIN, SHIFT TO DRIVE, MOVE CAR TO FOOD WINDOW, STOP, SHIFT TO PARK, OPEN DOOR AGAIN, RECEIVE YOUR FEED BAG, SITUATE FEED BAG OR HAND IT TO CO-PILOT, CLOSE DOOR, SHIFT TO DRIVE, AND DRIVE AWAY.  (NOTE:  During one of these steps they will be too close to the building to open the door and have to back up and re-approach the window after looking back at you with those cow eyes that say, “I know it this sucks for you, but I don’t care. So, back up so I can try this again.)

I know the economy is hard on people now and jobs are scarce.  I am not downing this person because her window wouldn’t roll down…Yes, yes I am.  Fix the window and THEN get your Double Quarter Pounder or 2 OR go the fuck inside!

The sun is up, it is warm outside, there are a few wispy clouds in the sky and the world seems right for that moment.  Then out of your peripheral vision comes a behemoth of a vehicle barreling down the road at ungodly speed!  The sound alone vibrates your eardrums.   Trees are bending to the air pressure this vehicle is producing.  As you turn your head to witness this new land speed record in action, you realize that it is a modified exhaust system on a late model Dodge pickup that is moving about 15 miles an hour. 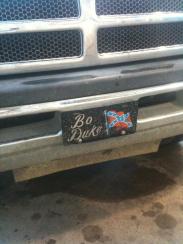 When I was young, the older people didn’t like loud music coming from cars. ( I assume the old ones still don’t.)  They had a term for that loud intrusive sound.  It was: Noise Pollution.  I used to think that this was the dumbest thing I had ever heard of.  “Noise pollution?  Shit, if its too loud-you are too old.” I used to think that…Now, I want to ram every vehicle that is louder than Bad Religion playing is playing inside my car.  The minute I miss one of Greg Gaffin’s lyrics due to an enlarged tailpipe with a chrome tip, I momentarily lose sanity and wish for their engine to explode.  I don’t understand the need for some people to cry to others, “LOOK AT ME.”  Yeah, I know some of you think it sounds cool.  I get that, but there has to be a point when you look in the mirror and admit to yourself that your missing teeth and excessive smoking have diminished your attractiveness and you need something else to make people look at you and say “Dang, that dude is bad ass.”   One more thing, Airbrushed car tags with defeated, racist, separatist army logos adjoining fictitious TV character’s  names don’t help your coolness at all.   I can’t believe no one has told you people this already!

Ads are everywhere.  Billboards, LED billboards, signs, banners, immigrants holding signs by red lights that read “Going out of Business,” pizzas that are 2 for $10, 0% APR on a new car (for qualified buyers)…  the information that signage alone yields is staggering!  On a 5 minute drive you may encounter hundreds of nuggets of information that someone, somewhere wants you to see.  You are powerless to avoid it, unless you drive with your eyes closed and that would not be good.  You are a captive audience to the corporate advertisers.  You would think that would be all the HELL you would have to endure.  BUT NOOOOOOOOOOOO!  Now anyone can intrude on your life with signs of their own in the form of personalized car decals.  News flash:  I don’t give a shit if “Cody” is number 6 on the Broncos T-Ball team nor do I give a flying fuck that “Shanee” is a cheerleader.  I really don’t.  OK, (deep breath) those are minor annoyances.  I understand that parents are proud of their kids.  As an expectant father myself, may fall victim to this in the future.   HOWEVER, as bad as that may be, there is another evil practice that I will NEVER , I repeat NEVER fall into.

You will never see me ADVERTISE MYSELF on my car.*

I fail to understand how anyone would want someone else to know my name or initials, my dogs name, or what fucking hunting club you belong to.  What purpose could this possibly serve?  How shallow do you have to be to want me to sit behind you at a red light and GUESS YOUR FULL NAME?!?!  AGHHHHHHHHH!!!  Wait!  I got it…P.S.N.  I did it!  Out of the myriad names that could fit this 3 letter puzzle, I figured it out.

Now go to McDonald’s, open your door, and order me a parfait, asshole.

“First off, I have no issue with any religion placing material in public places. That being said, I suggest you at least spell the name of whatever super being you promote correctly. It adds validity and intelligence to your recruitment efforts.”

I keep seeing examples of this on church billboards, pamphlets, and other forms of unsolicited paraphernalia.  When did it become acceptable for obvious signs of laziness, poor proofreading, or illiteracy to be accepted and not detrimental to the cause they are to represent?  I make typos and I am not, admittedly,  the best speller.  Would you like to know who is a real good speller?  SPELL CHECK!  Spell Check doesn’t catch everything.  You have to have a marginal IQ to aid the Spell Check for it to work correctly.  You need to have a grasp of mystical things like  syntax, homonyms, synonyms, and general spelling rules.  That being said, You would think that in something used to recruit people, like the image above, would have an extra minute or two put into the preparation of the recruitment document-unless your targets for recruitment aren’t into things like proper grammar and lean more towards window sticker self promotion ads and chrome tips.  In that case, they wouldn’t notice if Christ had an A.K.A. or not.

Venting done.  The next post will be about something more positive, like “Why Sarah Palin would make a great president of your local Chamber of Commerce.”

*unless I get Obtuse View.com stickers printed up.