I have recieved emails asking if I could post links to my Texas School Coverage in one place…ask and ye shall recieve!

1. Darwin was a liberal, communist, liar!

In my constant efforts to keep you abreast of this SHIT, RIGHT WING INSANITY, NONSENSE, ABSOLUTE Bull Shit  in TEXAS, I give you the latest installment (in case you miss it…the BS is highlighted in RED):

For months, the Texas State Board of Education has been hearing from “experts” about the direction of the state’s social studies curriculum and textbook standards. The advice to the 15-member board — which is composed of 10 Republicans — has included more references to Christianity, fewer mentions of civil rights leaders, George Wasington, and Abraham Lincoln. On Thursday and Friday last week, the State Board of Education took up these recommendations in a lengthy, heated debate. Some highlights of what the Republican-leaning board ended up deciding, and the debates that went on:

— On a 7-6 vote, the board decided to add “causes and key organizations and individuals of the conservative resurgence of the 1980s and 1990s, including Phyllis Schafly, the Contract with America, the Heritage Foundation, the Moral Majority, and the National Rifle Association” to the curriculum.

– Republican Don McLeroy lost a battle to “remove hip-hop and insert country music in its place from a proposed set of examples of cultural movements.” Republican Patricia Hardy said that while she disliked hip hop music, pretending it wasn’t around was “crazy.” “These people are multimillionaires, and believe me, there are not enough black people to buy that,” she said. “There are white people buying this. It has had a profound effect.” Country music was added as a separate measure.

– “McLeroy was successful with another of his noteworthy amendments: to include documents that supported Cold War-era Sen. Joseph McCarthy and his contention that the U.S. government was infiltrated with Communists in the 1950s.”

– “Republican board member Cynthia Dunbar unsuccessfully tried to strike the names of Scopes monkey trial attorney Clarence Darrow and Pan-Africanist Marcus Garvey from the standards. Asked by another member about her opposition to Garvey, Dunbar explained, according to the Texas Tribune: “My concern is that he was born in Jamaica and was deported.”

– The board “included a requirement for students in U.S. history classes to differentiate between legal and illegal immigration.”

Unable to reach to reach complete agreement last week, the board unanimously decided to “suspend debate on the standards until March, when they will take up other social studies subjects such as government and geography.” A final decision won’t be reached until May. McLeroy, who has been the driving force of some of the most conservative amendments, said that he plans on proposing more controversial standards, such as an evaluation of the U.S. civil rights movement and the “increased participation of minorities in the political process and unrealistic expectations for equal outcomes,” in addition to the “adversarial approach taken by many civil rights groups.” This debate is important not only because it will dictate how the state’s 4.7 million schoolchildren are taught social studies, but also because Texas “is one of the nation’s biggest buyers of textbooks.” Publishers are often “reluctant to produce different versions of the same material,” and therefore create books in line with Texas’ standards. “Publishers will do whatever it takes to get on the Texas list,” one industry executive told the Washington Monthly.

This was written by Paul Krugman in the New York Times.

Oh, boy. Paul Samuelson famously declared, “I don’t care who writes a nation’s laws — or crafts its advanced treatises — if I can write its economics textbooks.” But guess who’s going to be writing our textbooks?

The conservative bloc on the Texas State Board of Education won a string of victories Friday, obtaining approval for an amendment requiring high school U.S. history students to know about Phyllis Schlafly and the Contract with America as well as inserting a clause that aims to justify McCarthyism.

Outspoken conservative board member Don McLeroy, who reportedly spent over three hours personally proposing changes to the textbook standards, even wanted to cut “hip-hop” in favor of “country” in a section about the impact of cultural movements. That amendment failed.

Actually, Samuelson’s remark had more resonance than most readers imagined. After World War II, there was actually a concerted attempt to prevent the teaching of Keynesian economics at American universities, as described by Collender and Landreth (pdf). This campaign killed the first US Keynesian text, by Lorie Tarshis, but Samuelson’s book — which he said he “wrote carefully and lawyer-like” — managed to make it through the hazing.

I do have some personal interest here, of course: I’m the co-author of two college textbooks, and royalties from the intro book are a large part of our family income. But the high-school level is really where you want to worry about politicization.

Darwin was a liberal, communist, liar! 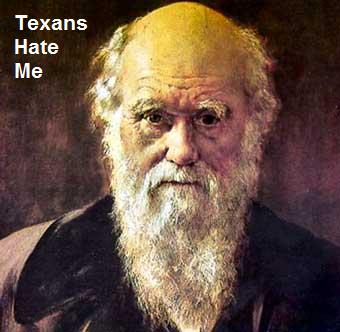 The title had me at “hello!”

How a group of Texas conservatives is rewriting your kids’ textbooks.”

What I read made me want to cry and cuss.

Two quotes from the article, just to wet your appetite, are:

“…but we are a Christian nation founded on Christian principles. The way I evaluate history textbooks is first I see how they cover Christianity and Israel. Then I see how they treat Ronald Reagan—he needs to get credit for saving the world from communism and for the good economy over the last twenty years because he lowered taxes.”

“This critical-thinking stuff is gobbledygook.”

Go and read it for yourself.

Be sure to comment on this, dear readers.  I can’t wait to read how you feel about this one.