A Chicken and a Thymus Gland

My wife, child, and I were in Kansas City for a family pre-Christmas get together.  We had an open night, and my wife’s aunt and uncle volunteered to watch the baby.  SOOOO, where else would I want to go while in Kansas City other than Chef Celine Tio’s restaurant Julian?  Ummm, Nowhere.  Of course we called the day we wanted to book the reservation.  I fully expected to hear, “Sorry, we are fully booked tonight.”  Much to my surprise, The kind voice on the phone responded to my plea with,” Yes, we can seat you then.”  I hope I didn’t hurt her eardrum as I squealed like a young girl encountering her 1st frog.  It was all set!  Julian here we come.

It goes without saying that I love food.  I really love good food.  Kansas City, Missouri is home to Celene Tio’s restaurant, Julian.  Watching The Next Iron Chef, my wife and I quickly started routing for Chef Tio. She was funny and entertaining and seemed like a genuine person- and she cranked out some killer looking (and sounding) food.  So, we knew the next time we were in KC we were definitely going to visit her restaurant.

If you watch any food related TV, you have heard of sweetbreads.  For those that don’t know what they are- it is not a bread at all.   Sweetbreads are the thymus gland of a calf (this isn’t always the case).  To an average American psyche- daunting to eat to say the least.  Through the wonderful world of the internet, we knew the menu options at Julian before we arrived.  Sweetbreads were on it and my mind could not stop thinking about them.  I was wondering about the texture of them, how accurate Jeffrey Steingarten’s account of them are, and could I actually eat it.  The balance to this was- “When can you get a A+ Chef’s recipe for sweetbreads again?”  I could not let this opportunity pass.

I talked about sweetbreads all day and all the way there.  Everyone in our party was well versed on what they were and forming their own opinions of them by the time we pulled into the parking lot.  We arrived and were quickly seated.  When it was time to place our order and the sweetbread request was to be made- I ordered caviar.  Yeah, I chickened out.  My table gasped when they realized I passed on the sweetbreads.  All of my talk- apparently it was hot air.  My trepidation of eating a gland made me order fish eggs.  As delicious as the caviar on homemade chips was, I immediately felt like a wussy.  I felt like a coward.  I couldn’t believe that I didn’t order sweetbreads in this perfect setting to try them.  I started convincing myself to order some- to be in the moment- to take a chance- to do what you wanted to do from the start.  After my internal Dr. Phil moment passed, I asked our server to please add an order of sweetbreads.  He smiled and nodded.  A calm pleasantness suddenly came over me, it could have been the wine, but I doubt it.  It was the expectation of the sweetbread magic that was on the way.

The sweetbreads arrived at the table in an oval bowl with a red and white checkered paper surrounding them.  They resembled something fried.  To a southern boy like me…perfect.  I selected one.  I smelled it.  I noticed my party’s eyes trained on me.  This was the big moment.  All the talk came down to this.  Here I sat, with great company, in Celine Tio’s restaurant with a sweetbread in my hand.  All that was left to do was bite it.  So, I did and it was wonderful.  It was fried crisp on the outside yet soft and meaty on the inside.  The flavor was unexpectedly sublime.  My face lit up with pleasure as the taste registered.  Now, my table mates wanted to taste one.  After the guinea pig lived- everyone wants one.  I offered them all one.  They all tried it – and liked it.  The oval bowl was quickly emptied and savored.

On my “culinary bucket list” a check mark instantly appeared by “sweetbreads” and “Eat at Julian.”  Two accomplishments in one delicious bite.

Chef Tio and I @ Julian

You should not assume that the meal in total it was any less delicious.  The crispy pork with the tamarind sauce was greatness on a plate.  The wine selection was amazing.  Not to mention the fact that Chef Tio visited our table, agreed to take a pic with me, and was completely a real human being was MONUMENTAL!

It is nice to know that our assumption about Chef Tio and her food was correct.  Her food and personality are both great.  We will definitely go back as soon as we get back to KC.

Recipe for a good day

1. Shopping objectives accomplished in 1.5 hours
2. Laughing about someones haircut with wife
3. Meeting up with a good friend for coffee and insanity in a craft store (see photo)
4. Finding a 1/2 price Le Creuset Dutch oven and buying it immediately
5. A couple rolls at Sekisui South for dinner

Everyday should be this good 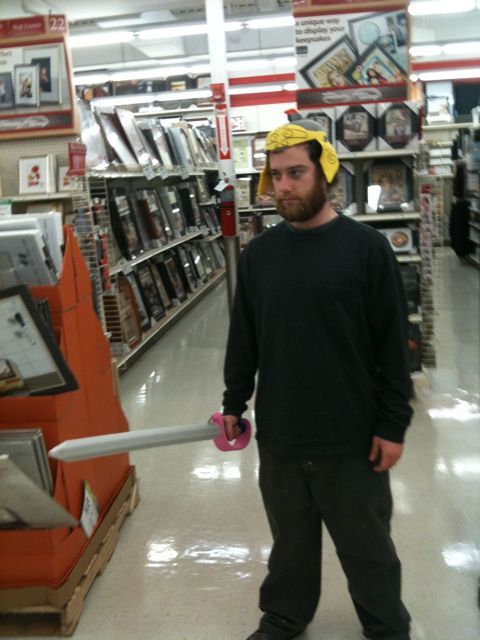 On the go posting

This dim photo is evidence of one less Scotch Egg in the world as of last night.
I can feel your jealousy. 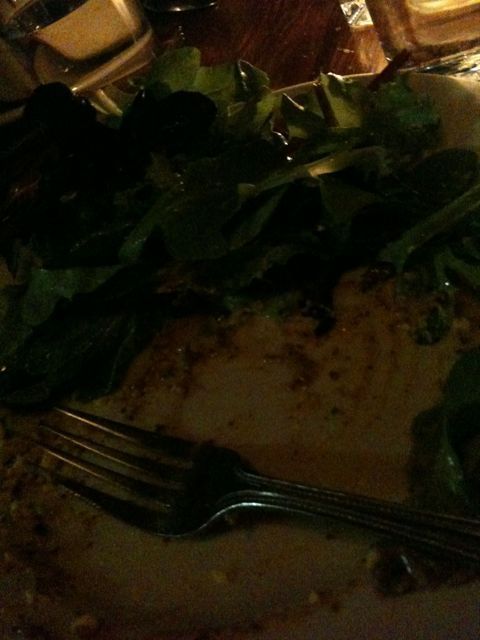 Posted in food, My World, USA

When my wife and I decided yesterday  that we were going out for dinner and her preference leaned toward “What ever you want…I don’t want to decide.”  I decided on SNACKBAR in Oxford, MS.  This place embodies everything that I like in a restaurant.  Good food, good music, good atmosphere, and raw shell fish.  As the 1st glass of wine, first 1/2 dozen oysters, and truffle/parmesean frites were ordered the discussion began over what the “meal” would be.  This act usually involves multiple partial  menu readings, wine sips, casual glances around to see what others are eating, and another reading of the menu all while talking about the day and upcoming plans.  It’s mental juggling 15 plus topics while the most important aspect of the WHOLE visit is dancing around in your head.  WHAT AM I GOING TO HAVE AS MY MAIN COURSE?

I have eaten many things at this restaurant.  However, one dish…one beautiful dish that initially was the most daunting thing that this southern boy has ever come across, stands out as what I mentally associate to this restaurant.  This culinary device has escaped my for 33 years, until I read it’s description on Snackbar’s menu.  As the horror and confusion made its way through my brain, I slowly realized that there was a caveat to my fear: YOU HAVE TO EAT THIS.  To the shock of my wife, I did.  I loved it.

As in the Star Wars movies, the Death Star is the ultimate icon in the movies…It’s purpose is to shock you and give you a sense of overwhelming awe.  Yes, I know it blows up, but that isn’t my point.  My point is this.  No matter what this restaurant does in the future, no matter how they change the menu, the decor, the wait staff…The Scotch Egg will float over that place like the Death Star pulling me with its tractor beam back again.

As I read the menu last night, my mind was reading:

I was powerless…Scotch Egg it was.  GREAT CHOICE.  It scared me…it pleased me…it made me happy.  Just like good food is supposed to.

Your homework is to eat one and THANK ME.

Here is a recipe: (you are welcome)

Posted in food, My World, USA

Monsanto is a name that those of us in the south grow up hearing.  It is synonymous with farming, cotton, seeds, soy beans, and farmers that you know and see everyday.  It has a non-intrusive, non-threatening, “we love farmers” vibe around here.  With Round-Up selling as fast as they can produce it and their Round-Up Ready Soy Beans and Cotton genetically modified seeds, needless to say they are more than a minor influence in the southern United States. So, when I saw the documentary “The World According to Monsanto” listed on my DirecTV guide, I immediately flagged it to record.  What I learned shocked me and really made me think about what Monsanto and its genetically modified seeds are doing for food production and the “intellectual rights” associated to a seed produced by a plant.

We learn in grade school that plants grow from a seed of some sort.  When that plant continues to grow it produces seeds of its own.  The plant does this so the plant can propagate its species.  You may assume that if you grow something from a seed you can replant the seeds that original plant produces and grow more plants.  That may be true…sometimes.  It is never true for a Monsanto seed.  Farmers must sign contracts that state they may not keep any seeds produced by the plants that they grow from Monsanto seeds.  Monsanto uses this policy to protect their “intellectual property.”

We also learn about cross pollination in grade school.  If a farm growing seeds bought from Monsanto cross pollinates with another crop near there grown from non-Monsanto grown seeds. The result is both fields produce genetically modified crops that fall under Monsanto’s GM seed property rights and the non-Monsanto crop owner will be sued. Mr. Schmeiser won is his ordeal, but hundreds others haven’t.

BUT WAIT THERE IS MORE.

WAIT, with all this talk about global food production and market domination, I have missed one important question… Is genetically modified food safe to eat? Well, Reports vary.  However the American Academy of Environmental Science has issued a moratorium on GM foods.  According to their study GM foods caused damage to the organs to animals who ate it.   Here is their position paper concerning their findings and an excerpt from that paper.

In all fairness this may be a biased study…WHAT?  A former Monsanto employee feels GM food is unsafe????

ARE YOU KIDDING ME!

So this study is saying that GM crops, like the ones Monsanto manufactures, are unhealthy to consume and cause health problems. I need to calm down….

Well thank god we have non GM foods to consume….ummm, apparently not.

“As of 2001, 75 percent of all food crops grown in the United States were genetically modified, including 80 percent of soybeans, 68 percent of cotton, and 26 percent of corn crops.”

Just to make it worse:  Here are the Top 10 Dangers of GM Foods

All I can say now is that we need to be more informed.   We just need to know that when we stop to smell the roses,  it may be a genetically “enhanced” blue rose.