Some Info for Mississippi Voters

Rep. Travis Childers, during his term, voted for (YEA) all of the following issues:

Exempting Guns from an Estate for Bankruptcy Purposes
HR 5827

Continuing Appropriations (Specifies that the funds appropriated in this act are not subject to a prohibition on use for offshore oil and natural gas preleasing and leasing (Div. A, Sec. 152))
HR 2638

Rep. Travis Childers voted against (NAY) on these issues:

Regulation and Oversight of the United States Financial System
HR 4173

Mr. Childrers, a Democrat, voted against every wedge issue held by the majority of Democrats.  His voting record is decidedly “conservative.”  Yet, it was reported that he was not re-elected because

“He did not reflect the views of the people he represented.”

If a conservative voting record does not reflect the people’s views, WHY ELECT A REPUBLICAN? You can clearly see Mr. Childers’ voting record is NOT a liberal one, I REPEAT MY QUESTION- WHY WOULD YOU ELECT A REPUBLICAN WHO DOES NOT REFLECT ANY OF YOUR VIEWS AND WOULD HAVE VOTED THE SAME WAY ON EVERY ONE OF THESE ISSUES? Why would you want a person who will actively emulate the failures of the Bush/Cheney White House.  I can not believe that you want this country to revert to the previous administrations failed policies.  In light of that fact, Why elect Alan Nunlee?

I know why.  It is because he is not a DEMOCRAT.  The demonized term that conservative, white people fear above all others- DEMOCRAT.  With us having a black President who is a Democrat, has conservative racism has now extended to white people who are Democrats? 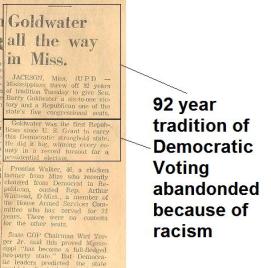 Yeah, I said racism.  Did you know that there was a time when the south didn’t vote Republican?  It is true.  The southern United States were always a democrat voting block until Republican Barry Goldwater’s opposition to the Civil Rights Act accidentally and permanently exposed the south for the racists they were.  Ever since 1964, the south has voted, by and large, for the

“republicans” who originally opposed the Civil Rights Act of 1964.  Barry Goldwater wanted to abolish Medicare.  Does that sound familiar to anyone but me?  Apparently, that is a good idea to the throngs of elderly Mississippians who voted for Alan Nunlee.

This archaic mentality, that some Mississippians have, is fueled by fundamentalist religion and racism.  Yeah, I said it.  Religious beliefs shape many southern voter’s ballots but, I’m not the only one who has a problem with religion influencing your vote.  Do you know who else had a problem with religion affecting daily life  BARRY GOLDWATER.  The increasing influence of the Christian right on the Republican Party so conflicted with Goldwater’s views that he became a vocal opponent of the religious right on issues such as abortion, gay rights, and the role of religion in public life.  How many Republicans do you see standing up for gay rights and denouncing the religious right today? NONE

Barry and I are ashamed of my state and it’s voters.