← The Funniest Thing You Have Never Read
FACEBOOK FRIENDS DO NOT REALLY CARE! →

Jared Newman beat me to this…So, here is his article!

It’s Doppelganger Week on Facebook, which means if anyone’s ever said you sort of, kind of look like a famous actor, musician or athlete, now’s the chance to pretend you’re just as beautiful. All you have to do is change your Facebook profile picture to any celebrity that shares a resemblance. Expect a lot of Tom Bradys and Megan Foxes. The origins of Doppelganger Week are mysterious. 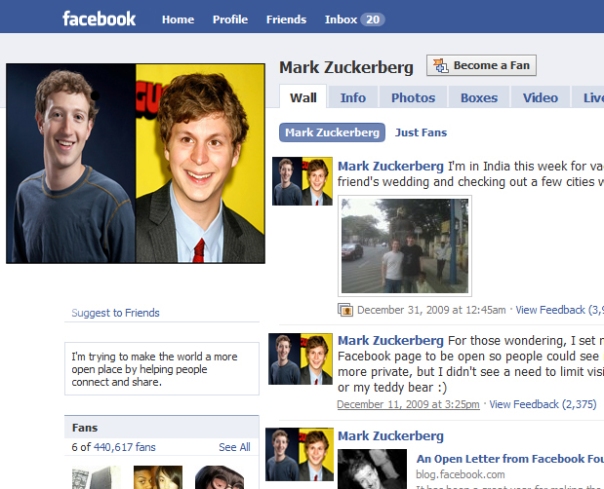 A Facebook spokeswoman told ABC News that they don’t have the ability to track down memes. Typically, they start with one person or group, and spread via news feeds. If there’s one serious implication here, Doppelganger Week is a testament to how open Facebook has become, able to create a network-wide phenomena by six degrees of separation. (NOTE: Image above is fake and is of Facebook CEO Mark Zuckerberg and “Superbad” star Michael Cera) If you want to see people’s self-images on display, there’s a Facebook group with an ever-updating news feed. Yup, people reckon they look like David Schwimmer, Renée Zellweger, Zach Braff and Katherine Heigl. Fortunately, my friend who thinks she resembles Jennifer Garner (no.) hasn’t joined the trend. What, no takers for Steve Buscemi? CNet posits that all this posting of celebrity images violates Facebook terms of service due to copyright violations, but it doesn’t look like anyone’s spoiling the good time. Facebook spokeswoman Brandee Barker said the site responds to takedown requests, but hasn’t received any for Doppelganger Week. It’s hard to pinpoint a firm start or end date for Doppelganger Week. Chatter picked up around the middle of last week, but with people still catching on, this trend should last longer than seven days. Indeed, who wants to go back to their average-looking selves?

← The Funniest Thing You Have Never Read
FACEBOOK FRIENDS DO NOT REALLY CARE! →