There are things that people need to read.  This is one of them.

It is always an education to watch our American writhings from overseas. It is particularly excrutiating watching the Republican Party presidential candidates who, on a daily basis, pronounce some ignorant racist or irreligious twaddle…which–amazingly enough–manages to be heard around the world. As Crowley notes below, today’s example primo is Newt, who really needs to get back on his meds, worrying about his grandchildren:

“I have two grandchildren — Maggie is 11, Robert is 9,” Gingrich said at Cornerstone Church here. “I am convinced that if we do not decisively win the struggle over the nature of America, by the time they’re my age they will be in a secular atheist country, potentially one dominated by radical Islamists and with no understanding of what it once meant to be an American.”

There is genius in this: no other human had located the secular humanist wing of radical Islam before. And then there is Herman Cain, the former chief executive of Godfather’s Pizza who is pretending to run for President, proving that a black man can be as gutter-cheap bigoted as anyone. If elected, he would not appoint a Muslim to his cabinet or the federal bench because:

There is this creeping attempt, there is this attempt to gradually ease Sharia law and the Muslim faith into our government.

Sharia law! Break out the burqas! Even Pete Wehner is appalled. I mean, what are these guys smoking? (Nothing so benign as marijuana, I would venture to say.)

This is my 10th presidential campaign, Lord help me. I have never before seen such a bunch of vile, desperate-to-please, shameless, embarrassing losers coagulated under a single party’s banner. They are the most compelling argument I’ve seen against American exceptionalism. Even Tim Pawlenty, a decent governor, can’t let a day go by without some bilious nonsense escaping his lizard brain. And, as Greg Sargent makes clear, Mitt Romney has wandered a long way from courage. There are those who say, cynically, if this is the dim-witted freak show the Republicans want to present in 2012, so be it. I disagree. One of them could get elected. You never know. Mick Huckabee, the front-runner if you can believe it, might have to negotiate a trade agreement, or a defense treaty, with the Indonesian President some day. Newt might have to discuss very delicate matters of national security with the President of Pakistan. And so I plead, as an unflinching American patriot–please Mitch Daniels, please Jeb Bush, please run. I may not agree with you on most things, but I respect you. And you seem to respect yourselves enough not to behave like public clowns.

Please, in the name of Abraham Lincoln and Theodore Roosevelt, run.

Mitt Romney has cloned himself! 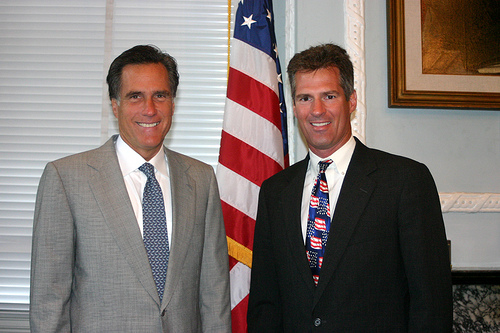 THIS IS A CONSPIRACY

With that “never say die” Mormon attitude, Former Gov. Mitt Romney has cloned himself in order to keep himself a viable candidate for any other “Liberal Witch Hunt” that comes up.

(On a bright note, I can now spell Massachusetts without thinking about it.  Although, I really don’t want to think about that place.   *YUCK*  So, thank you Mitt Romney and Mitt Romney 2.0)

*** SHIT, JUST WHEN I WAS REALLY STARTING TO HATE TEXAS…MASSACHUSETTS THROWS A HAT INTO THE RING***